Genetics; solved problems and discussions
Following are the solutions and discussion for questions 26, 27 and 30, for the genetics test conducted on 10-3-15

26.     Genes ho and dp are 9.0 map units apart, and genes dp and da are 26.3 map units apart. What is the probability of a double crossover in these regions?


27.   In maize, two plants that are both heterozygous for the recessive alleles a and b are crossed.  What frequency of double-mutant progeny will appear if a and b are 7.2 map units apart and both parents carry a and b in trans?

Based on the results what is the most likely map?

Solution
Some bacteria harbour a F or fertility plasmid. It is conjugative plasmid that controls sexual functions of bacteria.  Sometimes F plasmid may become integrated in the host chromosome. Such strains which harbour an integrated F plasmid are called High frequency of recombination (Hfr) strains.
In different Hfr strains, the site of integration of the F plasmid may be different, i.e. in some strains integration may be between the bacterial chromosomal genes a and b and in another Hfr strain, integration may be between the genes d and f.
When a Hfr strain (donor) mates with the F- strain (recipient), a nick is initiated at the OriT (Origin of Transfer) sequence of the integrated F plasmid. OriT marks the starting point of conjugative transfer. A part of the F plasmid is followed by the adjacent bacterial gene segments. Obviously bacterial genes closer to the F plasmid are transferred first.  Segments of the integrated F plasmid are at the beginning and the end of the DNA being transferred. To transfer the entire plasmid, the entire bacterial chromosome must be transferred first. But the donor and recipient cells separate prior to the complete transfer of bacterial genome and plasmid. The recipient now carries transferred bacterial genes, but remains F- as only a part of the F plasmid is transferred. The donor cell remains HFr. 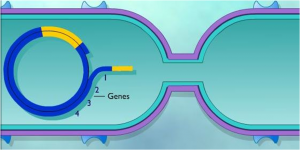 If we refer to the given data; in strain 1, the first bacterial gene to be transferred is trp, therefore the F plasmid must be integrated just ahead of the trp gene. Following that met is transferred, then his and then pro.  Therefore the order of genes on the circular bacterial chromosome is trp, met, his and pro.
If you look at the order of transfer in strain 2, it is clear that trp is between met and bio genes. That trp is adjacent to met is already confirmed from strain 1.
Strain 3 confirms that bio is on the other site of trp and bio is followed by phe and then pro.
The answer is d
Posted by Grassroots Academy at 4:41 PM