Solution:
Autotetraploids arise by genome doubling of a single diploid species. This doubling may be due to (i) fusion of unreduced (2n,) gametes (2n+2n=4n) or (ii) artificially induced by colchicine.

Colchicine is an alkaloid derived from the autumn crocus (Colchicum autumnale). It inhibits mitosis by inhibiting polymerization of microtubule fibers. Subsequently spindle fiber formation and separation of chromatids to opposite poles does not take place. This leads to doubling of chromosome number (2n +2n).
[As a matter of interest, colchicine is used in the treatment of gout. Gout is an illness in which excess uric acid in the body leads to deposition of crystals of  sodium urate,  in the joints, causing inflammation and pain].

There are 3 pairing possibilities during meiosis. As clear from the figure, formation of bivalents and quadrivalents will both result in formation of diploid gametes.

Solution
As you can notice, the entire amino acid sequence encoded by the mutated gene is altered after Leu. This is the result of a frameshift mutation. 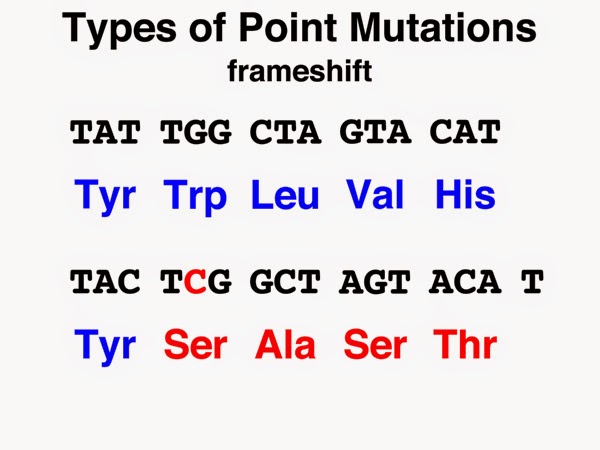 Fig; Frameshift mutation: Insertion of the C after the 4th nucleotide, alters the triplet sequence (the reading frame) after the point of insertion and hence the amino acid sequence.

Out the four mutagens mentioned,  5- bromouracil and  2-amino-purine are base analogues. They are structurally similar to naturally occurring DNA bases and can be incorporated into DNA in place of the normal bases.
Base analogues show higher degree of spontaneous tautomeric shifts than normal bases. The tautomeric forms have different base pairing properties. Tautomers are structural isomers that differ only in the position of the protons around the same carbon skeleton, which remains unchanged.
For example, 5-bromouracil is a thymine analoge. In its keto form, it is incorporated into DNA in place of thymine and pair with adenine. However, it can change to the enol form during replication, which pair with guanine. Thus, there can be a base mismatch during replication, inducing a mutation. However mutations due to base analoges would be point mutations.

Ethyl methane sulfonate (EMS) is an alkylating agent. It adds alkyl groups to purines. This can lead to mispairing, which causes a point mutation in subsequent rounds of replication. It can also destabilize the bond between the purine and deoxyribose, leaving apurinic (AP) sites. During the next round of DNA synthesis, any random base may be to be inserted against the AP site. This frequently leads to transversions as well as transitions.

Acridine orange is an intercalating agent. These agents are planar (flat) in structure and resemble a purine-pyrimidine base pair.  In solution they can intercalate (insert) between stacked base-pairs.  Replication of DNA containing intercalating agents often results in the addition of a base. This addition affects the reading frame of the gene, causing a frameshift mutation as is observed in this case.

Ethidium bromide, which is used to visualize DNA in gels is also an intercalating agent.  When inserted between the stacked base-pairs, it fluoresces bright orange under UV light, allowing the DNA  bands on an agarose gel to be visualized.

116. A co-transduction experiment was performed to decipher the linear order of 4 genes: a, b, c and d. Three sets of exoeriments were done where transductants were selected for a (Set-1) or b  (Set-2) or c (set-3) and screened for co- transduction of the other markers. 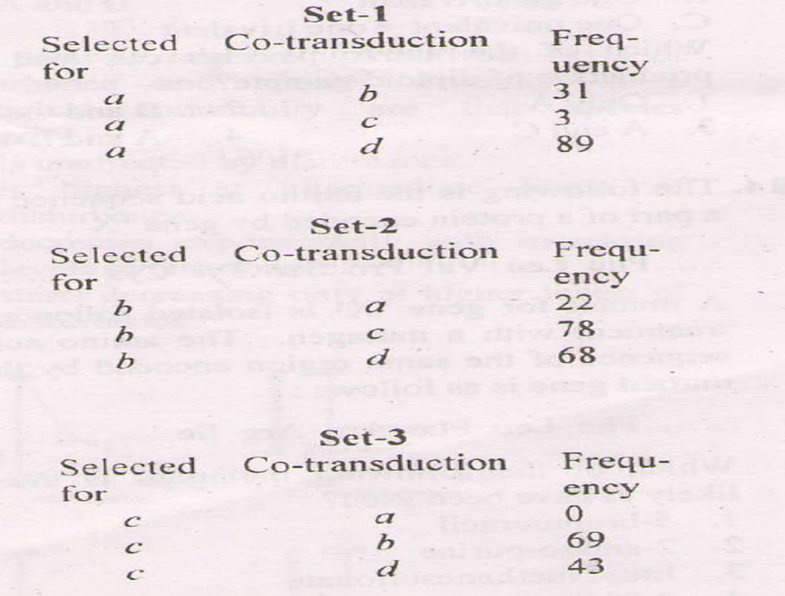 Solution:
Transduction is the process by which DNA is transferred from one bacterium to another by a virus.
Inside the bacterial cell, the virus undergoes its normal infective cycle, where it replicates its DNA, expresses its genes by synthesizing its own proteins and finally packages its DNA within phage heads to form progeny viruses.
Sometimes, the virus may package bacterial genes within the phage heads, which are then transferred to another bacterial cell. Obviously, the closer the two bacterial genes, the greater the chance that they will be carried on the same DNA fragment, packaged into a virus and transferred to another bacterial cell. This is called Co-transduction. It is the process by which two genetic markers are simultaneously packaged within a bacteriophage for transfer to a new host bacterium.
The recipient cell becomes a merozygote ( a partially diploid bacterial cell, formed as a result of a DNA transfer process). Subsequently, the transduced bacterial genes may be incorporated into the bacterial chromosome by recombination. The presence of transduced donor alleles can be detected by plating onto selective medium.

In set 1, the transduced allele a has been selected for on the appropriate selection medium.  We have to see which of the other genes has been co transduced along with a at the highest frequency (this will be the gene closest to a). Data tells us that d is co-transduced at the highest frequency (89%) followed by b (31%), followed by c (3%). Therefore the order of genes is a, d, b, c.
Set 2 tells us that the genes closest to b is d, then c and then a. This fits the above pattern.
Set 3 confirms that c is closest to b, then d and c is not co-transduced with a in this case

117.  A hypothetical biochemical pathway for the formation of eye color in insect is given below.
Two autosomal recessive mutants ‘a’ and ‘b’ are identified which block the pathway as shown above. 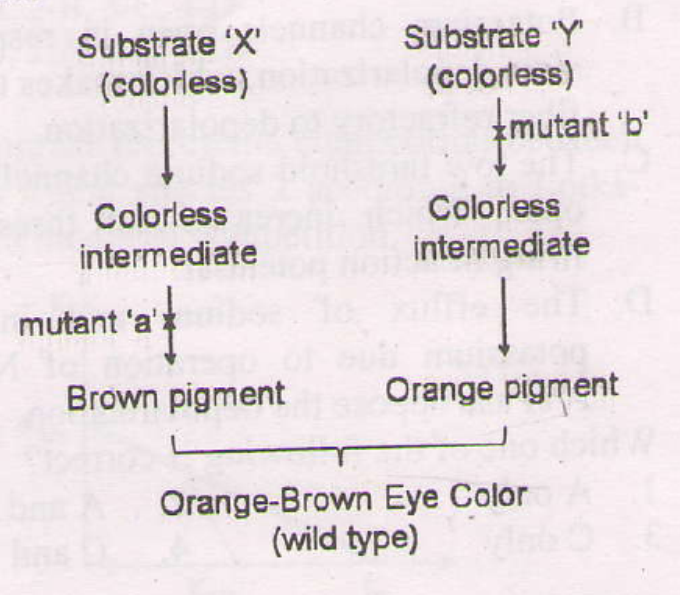 Solution
Genetic drift—along with natural selection, mutation, and migration—is one of the basic mechanisms of evolution. Genetic drift is the change in the frequency of an allele in a population due to random sampling of organisms. This is due to chance or sampling error.

(i) In each generation, it’s a matter of chance, whether a given individual survives and reproduces. The alleles in the offspring are a sample of those in the parents. Therefore chance decides the individuals whose genes will be inherited in the next generation, not necessarily the individuals who are healthier or “better” individuals. (ii) Thus allele frequencies can change at random in the next generation. (iii) Genetic drift may also some cause gene variants to disappear completely, thus leading to loss of genetic variation. (iv) In a smaller population, where there are already fewer copies of an allele, the effect of genetic drift is larger. (hint: the answer is self evident from points (i) through (iv)
Posted by Grassroots Academy at 4:46 PM